Showing posts from July, 2008
Show all

July 31, 2008
I finally had a chance to get my first flight in at Mussel Rock earlier today -- soaring over the coast was everything I had hoped for.  No need for a vario at this place; lift is everywhere.  So much lift, that when I was ready to land, it took judicious use of big-ears (which is very common to see out here, and clearly helpful to ensure you avoid blow-back ) to get past the incredible buoyancy I was getting.  I have no idea why some folks call it cliff-boring .. soaring is a ton of fun, and it's great to be a little more familiar with this site.
Post a Comment
Read more

July 20, 2008
A few weeks ago, I purchased Eye-Fi's fancy geolocating and wireless-uploading SD Card , which I'd seen a demo of at WhereCamp . I love gadgets, perhaps too much, but this thing is indeed a great implementation of a cool idea. And, as yet another harbinger of how almost everything will soon be location aware, it has all kinds of potential. For example, devices like this could be used as the poor man's (no iphone) location updater.  Since they haven't opened up their API (allegedly it's on their to-do list), and because I've been looking for any excuse to play with FireEagle , I just finished up a little python script that queries my flickr photos every few minutes and (if there's a new one that eye-fi has uploaded), it grabs the WOEID and updates my FireEagle profile.  Working with the Fllickr and FireEagle API's was fun. Obviously a bit of a hack, but once they do open their API (so I don't have to pull for data), or otherwise allow us to
Post a Comment
Read more

July 19, 2008
Ate lunch at Eric's today. Despite their scary restaurant inspection report ( EveryBlock reports are yet another nice feature of San Francisco), it was one of the better meals, and deals, I've had in a while. $6.50 total bill for a huge plate of tasty kung-pao goodness, soups, and tea. I'll be eating lunch here again.
Post a Comment
Read more 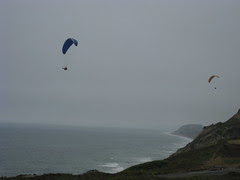 I spent the morning at Mussel Rock Park , kiting and getting back up to speed on some ground handling basics with some good tips, and a great site overview from Jeff of Airtime San Francisco . I've never gone cliff soaring before, and I'm certainly not used to the fog! Starting around noon, there were a few gliders in the air, and I understand the weekends can be packed. If the weather looks good, I'm excited to get some flying time in early next week.
Post a Comment
Read more

July 17, 2008
When I first saw walkscore.com I was impressed with their simple but clever approach to creating a walk index. Ranking walkability is an interesting topic for me: I've had the opportunity to work on a few different sprawl and walkability models in the past, but these often tended to be complex. And I don't mean they used tricky or especially unintuitive algorithms (although do believe this type of analysis is often ruined by unintuitive modeling). I mean complex in terms of the data sources. In the world of ranking walkability, many sources (assessor, zoning, sidewalk attributes, etc) that the more academic models tend to rely on are just not comparable from city to city. To me, one of the key features of the new version of walkscore is that it keeps true to it's initial approach by keeping it simple (business listings and census data), and using a straightforward methodology . By focusing on amenities and where people live, can a model like this be use
Post a Comment
Read more

July 15, 2008
A long time ago, I decided I should really start a blog. But hey - it takes some effort. I think. I put it off, promising myself I'd start one as soon as I moved out of Seattle. Until recently, it seemed like I might never have to deal with this first post, let alone come up with a blog title. But, thanks to Deema (and her job at YouTube), here I am. I won't bore you with details on our move, which was fairly straightforward. One important piece of information I can confirm: drugging cats before bringing them on a long car trip is a very good idea. Now that I'm getting settled in, I'm excited to start to take advantage of the local tech entrepreneur scene. With any luck, some near-future post will be on the start of a SFUGOS group (in the line of FRUGOS and CUGOS ).
Post a Comment
Read more